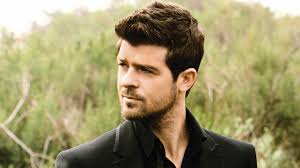 This article titled “Robin Thicke hits the bottle” was written by Marina Hyde, for The Guardian on Thursday 23rd January 2014 18.38 UTC

Always a pleasure to receive a press release concerning the early 21st century adventures of Baron Robin Thicke, and this week’s effort on behalf of cognac manufacturer Remy Martin is certainly no exception.

Ever since the misunderstood Blurred Lines legend revealed he “thought a sheep and a lamb were different animals”, the next stage in his journey of discovery has been a matter of keenest interest.

Excitingly, it appears to lie in the field of distilling, with the aforementioned press release announcing that Remy Martin brand ambassador Thicke “has injected his bold and extravagant styling into the iconic VSOP bottle”.

Mmm. Not entirely sure about that choice of the word “injected” – I’m now picturing Robin tampering furtively with the product using a big syringe. Still, as long as the bottles are clearly labelled “Alcohol 40%, Rohypnol 1%”, then let’s hope the relevant authorities are satisfied.