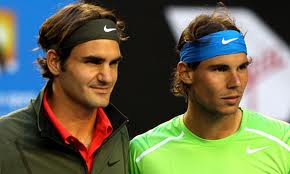 This article titled “Roger Federer and Rafael Nadal clash may finally decide who is the greatest” was written by Kevin Mitchell in Melbourne, for The Guardian on Thursday 23rd January 2014 18.07 UTC

The tennis match on Rod Laver Arena on Friday night between Roger Federer and Rafael Nadal is not just a semi-final of a grand slam tournament, an eliminator to determine who will play Stanislas Wawrinka in Sunday’s final of the 2014 Australian Open. It is a good deal more than that.

It will be the 33rd and possibly last encounter at this level between the two players regarded without significant disagreement as the best the game has ever had. Because of their CVs and the dwindling time left to them – Nadal, 27, leads Federer, 33 next birthday, by 22 wins to 10 overall – the result will probably condemn the loser to second place in the history of the game. This fight is for the championship of each other, as someone once said of Muhammad Ali’s third bout with Joe Frazier, the Thrilla In Manila. They do not have many punches left to throw.

Not many think Federer can eat up the 12-match deficit between himself and Nadal, but neither do many with credible opinions think there is a lot left here in Nadal, who is still nursing an ugly blister on the palm of his serving hand after coming through a tough quarter-final against Grigor Dimitrov.

Federer is in scarily impressive form; Nadal is getting the job done, coming through after losing a set to Dimitrov. If Nadal knocks out Federer, it is unlikely the Swiss will get off the canvas again or ever rediscover the magic that has won him 17 grand slam titles. Defeat would be a crushing experience for either of them, and for those who adore them. Sometimes, tennis is like a marriage that coasts through crises without anyone outside seeing past the bunting and smiles.

If, however, Federer were to beat the odds and Nadal for the first time in five matches since 2012, he would rekindle hope among his followers that he is Superman and, by stretching his total of grand slams to 18, he would invite the sort of hysterical media attention that has attended all of his sunlit days.

What is not disputed is that Federer has not beaten Nadal in a grand slam since the Wimbledon final of 2007. Last year, after seven months out to rest his injured knee, Nadal resumed his dominance over the rest of the field, winning 10 titles, two of them majors. Those are numbers that are tough for even Federer to accept with equanimity.

Pat Cash, the Australian former Wimbledon champion, puts it starkly: “Rafa is a better player than Roger. Simple as that. Roger is great, but Rafa is better. And you don’t have to just look at the numbers.”

What they share is an aura, and that can be worth maybe a set against anyone else, but nothing at all against each other. Between them, they have played in 30 grand slam finals; Wawrinka has played in none.

What will prove crucial is their attitude, philosophy and the advice flooding into their ears. Nadal’s set-up has not changed; his uncle and coach Toni remains the strongest voice in his preparation, and he will urge Nadal to fight to the final bell. For Federer, a familiar face has been seen at his side over the past week in Stefan Edberg and the Swede, no great gambler, might have given the Swiss a dose of pragmatism, urging him to abandon the carefree attitude that delighted the crowds but sometimes affected his judgment.

Edberg, who cruised at the net like a shark, has already imbued Federer with the confidence to go forward consistently. He went to the net an extraordinary 66 times against Murray, and profited 49 times. Nadal would surely have seen the evidence of Federer’s new tennis. Edberg’s mentor was Tony Pickard, who did not preach radicalism but was big on detail. When Federer said earlier in the week that he had never planned a fight before, it was no surprise; he has always relied on his intuition. But now he has applied science to his free-wheeling tennis. Now he is far more dangerous.

“I am going to prepare as if it were a final,” Federer told L’Equipe. “Every match Rafa had played differently. Against Dimitrov he was a lot more passive than in his match against Gaël [Monfils, in the second round]. I don’t know how he is going to play against me. I think he is going to try and deprive me of time.”

Time is a recurring theme. Who knows how much longer Nadal will battle his own body, or how long Federer can resist the sunshine of retirement? For now, they are geared up like a couple of heavyweights, sweating in the dressing room.

Waiting for either of them is Wawrinka, the Swiss who did a convincing job on Berdych on Thursday. “I feel great,” Switzerland’s second best player said. “It’s amazing. After the semi-final in the US Open I knew that I was close to being there.” Now that he is here, he remains beguilingly dismissive of too much thinking. “I’m enjoying all what’s happening here,” he said. “I’m playing great tennis. I know that I’m going to feel ready physically because I have two days off to be ready for the final. The most important thing is that my game is there. If I make the final here, if we can make a Swiss final, it will be something just amazing in a grand slam. I will be really happy if [Roger] can win.”

If they meet on Sunday, he will be equally happy if Roger does not win. Sentiment only takes you so far.